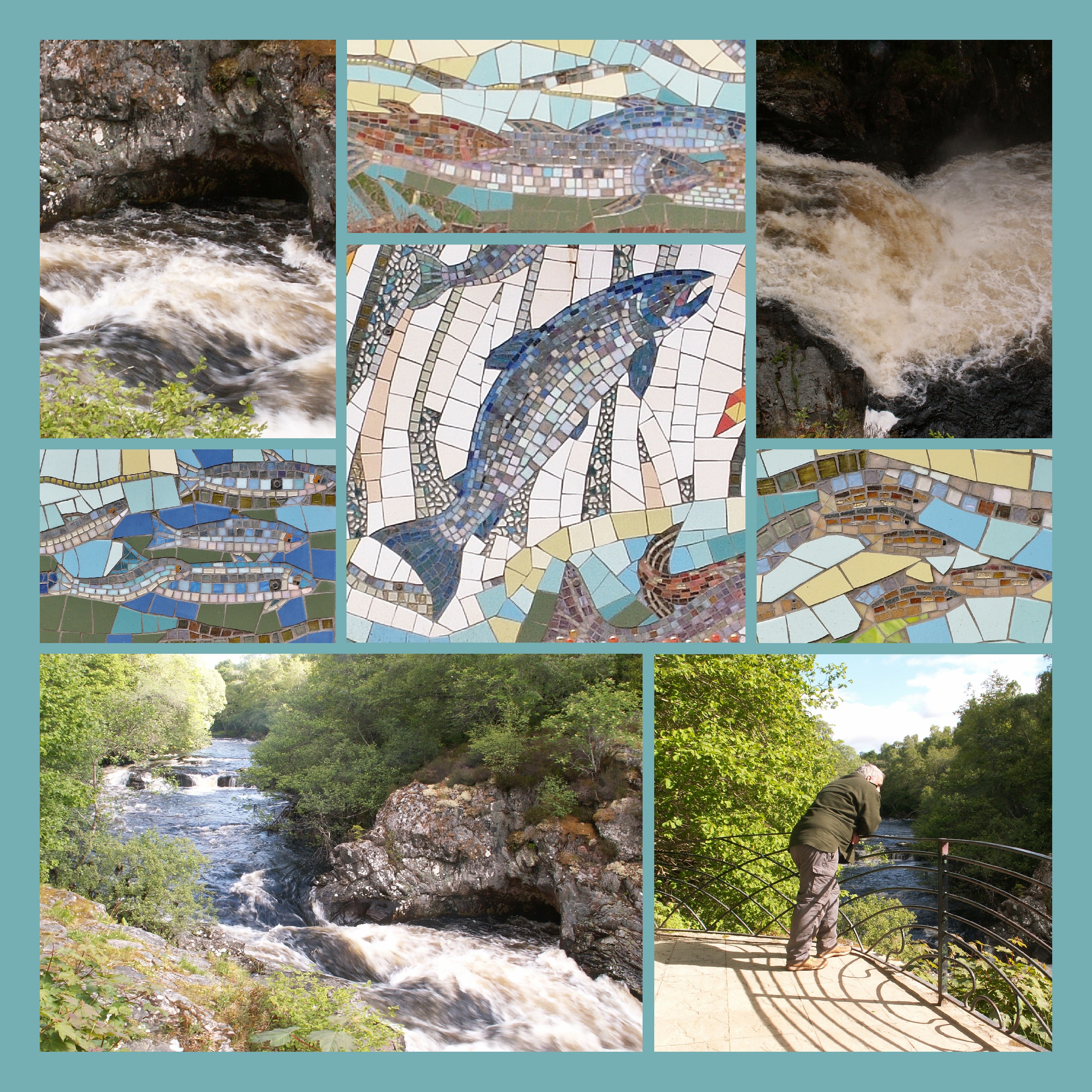 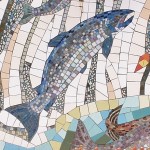 The Falls of Shin, recognized as one of the best places in  Scotland to view salmon jumping, are situated an hour’s drive north of Inverness in the north of Scotland.  Inverness itself is about 260 miles north of where I now live.  Even when I lived 30 miles east of Inverness for the first twenty-four years of my life, the opportunity to visit never arose or perhaps more accurately,  for various reasons I didn’t ever make it happen.  However, in 2013, during a holiday near Inverness, a day trip was arranged which included a visit to the Falls of Shin, so an ambition of many years’ standing would be achieved.

Prior to this, in 2012, I had spent a day at the big national event near Edinburgh, Gardening Scotland.  In the Craft Marquee, I spoke to a lovely young lady who makes mosaics and various ceramics.  I noticed a photograph of a mosaic of a salmon, which I admired.   She told me the salmon was part of a larger mosaic depicting the Life Cycle of the Salmon, which she had been commissioned to make – for the Falls of Shin Visitor Centre!

So I was doubly pleased about our visit.  Then came the bad news.  A fortnight before our planned visit, the prestigious Visitor Centre had burned to the ground – I assumed with the mosaic inside it.  I was so disappointed.  To be so close …..

However, there was good news to come.  When we got there, a friend younger and fitter than me, hurried  down the path to the Falls and was able to shout up, with great excitement, that the mosaic was down there!  My assumption had been wrong.  The mosaic is situated out in the open as a back-drop to the viewing platform, so it was safe.  I think the mosaic is fabulous – very colourful and beautifully made.

When visiting Gardening Scotland this year, I spoke to the young lady again.  Her name is Helen Michie, website www.helenmichieceramics.co.uk.  We had another lovely chat.  I told her I had seen her wonderful mosaic .  I also told her about Cropdog and Tami’s  mosaics and that I would like to put the two pages I had made on Cropdog Gallery – she was very interested and pleased.

So all was well that ended well.  Now I have a new aim – to visit the Falls again but this time when the salmon are jumping.  Maybe later this year?